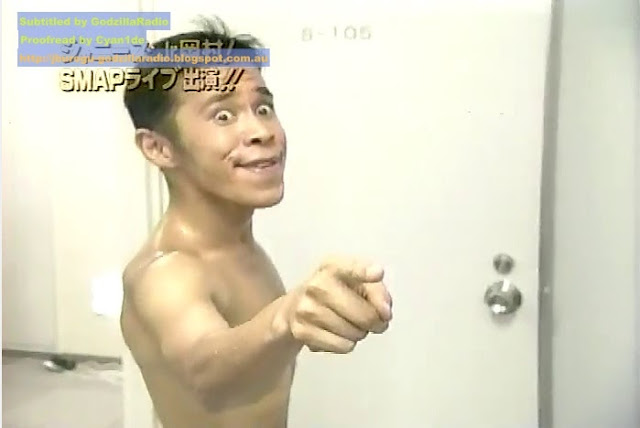 Sorry about the long wait.

It seems like a bit of subbing fatigue is setting in, and I'm finding it hard to doing it for long periods.
Or maybe it's just fatigue from life stresses.....sigh. (I need a friggin' job!)

Anyway, it's done now, and time to move onto the next video, I suppose.

So, just a short description of the video now, even though I wrote one for the previous post with the first half of the video.

"This episode of Mecha Mecha Iketeru features the hosts, 99 (Okamura Takashi and Yabe Hiroyuki), interacting with  Johnny's Juniors. The Johnny's Juniors are young aspiring idols that are trained by the Johnny and Associates talent agency, until they are deemed fit to debut. These kids are usually between 7~16 years of age, and have their own cult following-ish gatherings too.

Okamura, despite being in his late 20's, attempts to join the Johnny's Jrs, and then appear in a SMAP concert as a backup dancer. By the way, SMAP is/or were, the undisputed idol kings (mainly thanks to Kimura Takuya, aka Kimutaku) during the 1990's and 2000's, until they grew a bit old and gradually replaced by Arashi as the top dogs."


I've been busy this past week or so and therefore haven't been able to upload hardsubbed videos.
I'll post the .ass, which you can use in conjunction with the raw file.

GET FROM MEDIAFIRE [1 GB] 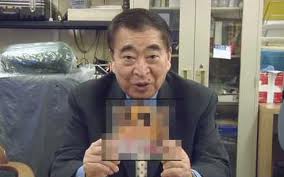 Okamura impersonates a guy called Nashimoto Masaru, who was a famous show business reporter who's catchphrase was "Kyoushu desu" ("Sorry to bother you.."), when approaching celebrities for an interview.


KONDO MASAHIKO
Was one of the early idol stars from the Johnny's agency. Initially gaining popularity as a member of the Tanokin Trio in the early 80's, before forging a successful career as a solo idol. His most famous work is generally agreed to be "Gin Gira Gin Ni Sarigenaku", the dance for which Okamura impersonated.

Cue corny 80's music and dancing, and everything else.


TAKIZAWA AND TSUBASA
These modern idol stars make an appearance in this Mecha-Ike special as Johnny's Jrs.
I didn't recognise them the first time I watched this video (because I didn't even know about them), but at some point I recognised them, and got a mild shock of surprise. It's interesting to see that these little kids developed into full grown stars (even if i don't really appreciate their work), and equally interesting but sad to see all the other kids who amounted to nothing in the showbiz. Oh, by the way, Kanjani Jr also make an appearance, and many members from this group are now famously part of Kanjai ∞ ( Pronounced: Kanjani Eight).


Nowadays, Takizawa (aka Tackey) and Tsubasa have formed a singing unit, of mostly pop tunes accompanied with hand dancing (in other words waving arms around).

Videos of them actually doing something are quite rare on youtube. Probs because of Johnny's tight clamp on their copyrighted material. Nevertheless, here's a horrible live show of theirs. For their sake, I hope it looks horrible because it's filmed by someone in the audience.....On second thought, the guys who dissappeared from showbiz may have got the better deal.

ANTONIO INOKI
I've written about him several times before. Basically, most famous pro wrestler in Japan.
Most well known for
-His wrestling skills
- Massive chin
-Smacking people in the face to inject "kiai",
- Yelling "Genki desuka!" (Are you feeling good!) and "1, 2, 3...DAAAAHH!!"
-Cobra twists. 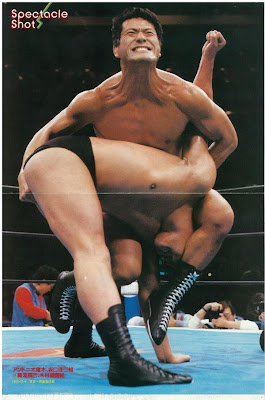 TRIP AROUND JAPAN WITH NAKAI
This was alluded to a couple of times in this episode. At the end of almost every year, the duo from 99 and Nakai Masahiro of SMAP go on a trip around Japan and showcase various foods you can eat in the different parts of Japan.


SAKATA WALK
The Sakata walk is a comical walk invented by veteran comedian Sakata Toshio. He was quite popular during the 70's, and remains a senior figure mainly in the Kansai region, where he regularly features in the Yoshimoto Shinkigeki (comedy stage show). He recently appeared a Gaki no Tsukai episode where Yamasaki pretended to freak out about something and Sakata ended up thinking he was possessed by a ghost or something and began rubbing his back. (Oh, it's episode 2013.03.10).

Okamura also does a few impersonations of Shimura Ken's jokes. One was with the Henna Ojisan, (Strange Old Man) character, and the other the Bakatono (Idiot Emperor). Shimura Ken was a huge comedy star who started off as a member of the Drifters (a sort of Monty Python of Japan). He has been a very influential figure for many comedians, and is famous for many gags, one of which is "Ai-n!" with the Bakatono character. Not really sure what it's meant to mean.

Below, is a video example of Henna Ojisan, who is also popularly associated with a trademark dance. The 2nd video is the crazy utter mindfucking (for unsuspecting Westerners) music video of the Ai-n Dance, along with Morning Musume by-product, Mini-Moni.

MITSUURA YASUKO
Mitsuura is a member of the regular cast of Mecha-Ike. Although 99 are the stars of the show, they do have a group of support members, which also includes Mitsuura and her partner Okubo (as the duo Oasis), Arino and Hamaguchi of Yoiko, etc. She sells her bespectacled, ugly, and "forever alone" image to full effect, and has been a successful female comedian in a generally male dominated industry. 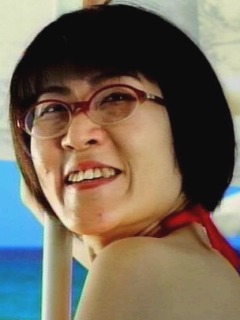