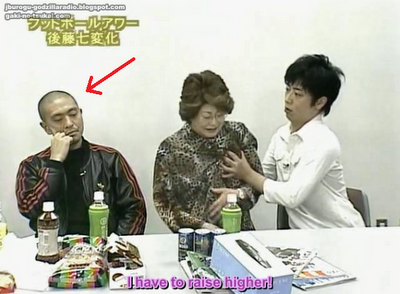 Thanks for you patience waiting for a subbed video while I finished uni exams.
I probably did okay although I'm not too sure about some.....haaa

I thought that it was about time for another "Gaki no Tsukai" especially since al4bandi was kind enough to time it once more. It also didn't take too long because there isn't as much talking in this one.

Shichihenge is a long running segment of this show where a comedian does seven transformations (that's what shichihenge means) and tries to make the Gaki no Tsukai crew laugh. Whoever that fails to hold in a laugh must pay up 1000 yen and put it into a box. You are judged on the total amount made and put on a list to compare with other comedians. Oh, and the money goes to some sort of charity if you're wondering. At least, it's supposed to.

This time around it's the turn of Goto Terumoto, the straight man from the duo Football Hour.

GET FROM MEDIAFIRE [189 MB]
Get .ass subtitle file

The part where Goto is making a pencil case out of the milk carton was a parody of this show. The "Can you do it?" was the song that gets played while the guy is making stuff.
Posted by GodzillaRadio at 20:48