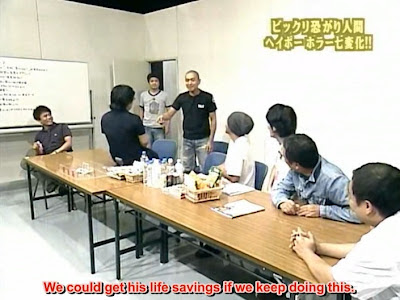 Thanks for your patience, here's the first video sub after one month of break time.
Quite a few people asked me for this one to be done so felt like getting it done so no more of you will ask me anymore!

In this episode the Gaki team tease Heipo by scaring him with various disguises. If you're not that familiar with the Gaki no Tsukai series, Heipo is the producer (or director?) of the show and is known to have an extremely high sense of fear towards just about anything unexpected. Some of the things he gets scared at is so ridiculous that it seems fake but who knows?

Also, they say this epsiode is an altered version of the shichihenge series. I don't think any have been subbed yet so I'll explain what it is: Firstly, "shichi-henge" means "7 Transformations". The premise of the series is that they are in a meeting to decide on new projects for the show. One person goes out of the room and comes back in "transformed" and tries to make the others laugh somehow. This is done seven times and each time someone laughs 1000 yen is put in a box to be donated to a charity foundation. The aim is to make the most people laugh, and get the highest amount of money in the box.

This is time it's 1000 yen for each time Heipo gets scared and the others take turns to scare him.

So anyway, hope you enjoy it.

GET FROM MEDIAFIRE [209 MB]
Subtitle File
Subtitle file might not sync with the video you have. Sorry.

HANDKERCHIEF PRINCE
The "Handkerchief Prince" was a nickname given to the baseballer, Yuki Saito, because he often wiped his sweat with a handkerchief before pitching on the mound. Yuki Saito wikipedia 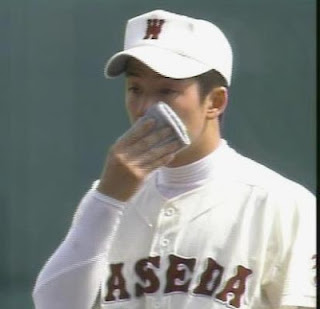 SHOKUPAN-MAN
Shokupan-man was a character off the kids cartoon, Anpan-man. The heroes on this show are bread people, I don't know how they came alive, but they have replaceable bread heads which you can be remade in an oven. Anpan-man often lets people take a bite from his head if they're hungry or hurt so his head is often replaced. Shokupan is just the ordinary loaf bread. Anpan is a bun with red bean paste inside, and their are characters called Currypan-man (Curry bread), and Melonpana-chan (Melon bread). 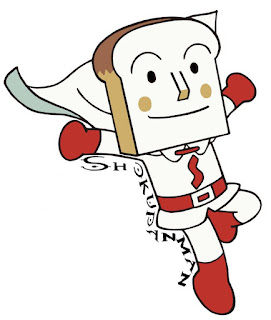 GEGEGE NO KITARO
This is another popular kids manga/anime. It features many "yokai" which are Japanese ghosts, monsters, spirits etc. Wikipedia. I used to watch both Anpanman and Gegege as a kid in Japan.... 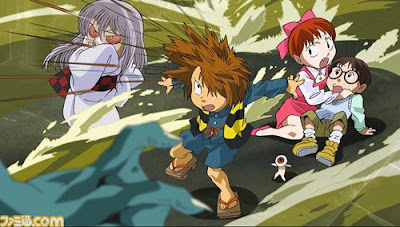